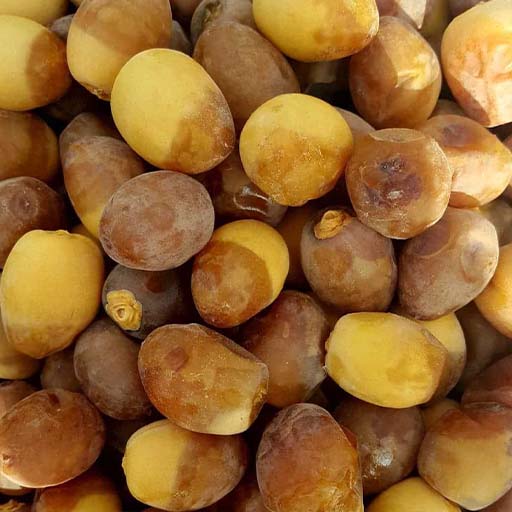 Barahi dates According to many people, especially Khuzestan people, palm dates are among the most delicious dates. Barahi date are originally native to Iraq. In Khuzestan, of course, we also grow and harvest it in abundance. Due to its late maturity and good resistance to moisture, date palms have gained a great reputation.

Barahi dates are very important and economically and commercially important dates, especially in Khuzestan province and of course for Iran. Although these dates were mainly cultivated in Iraq, today there is a wide range of palm trees in Khuzestan province. Apart from Khuzestan itself, palm trees are harvested every year in the cities of Shirin, Sumar, Bandar Lengeh and Dehloran and to a large extent in Borazjan.

Barahi dates are yellowish-brown in color. These dates tend to yellow more during Khark and eaten lighter when browned and eventually reach full brown.

The dates are oval in shape, their texture is soft and they belong to the family of wetter and wetter dates. The good hassle of dates is that it can be used well in both Khark, Rabat and when the dates arrive.

The skin of date palm is thick and the ratio of palm to palm kernel is about 77.7%. The core is almost attached to the meat, though it is easily separated and the fruit cap does not stick to the fruit very much.

Storage conditions are easier to handle when the dates arrive and can be stored for relatively longer periods (at ambient temperature). Barahi dates are harvested in August and early September. Mostly after harvest, it is packaged in carton boxes ranging from 1 to 10 kg. Of course, recently in standard plastic containers, this is done by some packaging companies.

In general terms of packaging and sales of these dates, which were traditionally done in previous years, today with the appropriate investment in more mechanized and standardized packaging, the Gilda Dates is one of the leading companies in the manufacturing industry, Harvesting and packing of date palms including Barahi dates and distribution of the highest quality Barahi dates in Iran and other countries of the world.

Khark Barahi dates palm has a good sugar content and is widely used in the food and beverage industry. Khark is a bit of a disgust but it can be used because it is sweet enough. The Barahi dates have a good sweet taste and are one of the best and best in the world and have a delicious taste. The weight of each date palm is approximately 2 grams. Of course, these dates also have more or less fleshy texture, which makes this product and fruit health the first and second most recognizable.

This product is one of the (soft) varieties and its fruit shape is spherical which can be consumed in all three stages of Khark, Rhubarb and Date. Of course, most of it is in the form of rhubarb. With the new packaging methods, Gilda dates have become one of the most attractive varieties of foreign markets. Barahi dates are among the most favorable international trade varieties whose main origin is Abadan and Khorramshahr in Iran.

It is worth noting that the taste of Iranian date palms is much better and more favorable than that of other Persian Gulf countries.

Date palm has many fans both in Iran and in other countries, including European countries, and is one of Iran's most valuable export dates. Deemed to be. These dates cannot be cultivated everywhere because of the specific weather conditions. In order to cook or ripen, Barahi dates need very hot air and intense hot wind. That's why it is called brahimi, because brahimi means hot wind. This palm cooks at the height of heat and is one of the best dates in the South.

Dates are warm and dry in nature and highly recommended for those who are cold and sodas. Between 2 and 4 of these dates can adjust your body's routine. It is recommended to soften the breasts of those who cough in 1 gram of water in 5 grams of water and take two to three drops of boiled water daily to see its effect on softening and drying of the chest. . This syrup is of course suitable for people who have kidney problems and even those who have back pain or joint pain are advised to take this syrup.

Blended dates with fenugreek are very suitable for bladder stones. Even people who have sex problems are recommended to soak or boil dates palm with some cinnamon in fresh milk and boil it daily. They fast for their problems to be resolved.

Generally, due to the warm nature of these dates, people with hot temper should take care of their consumption. These dates are an excellent source of iron, which is very suitable for people with anemia. By the way, dates have a lot of fiber, which is very useful and useful for relieving constipation and digestive problems. These dates have B vitamins and are useful for nerves and stress. Dates Manufacturing Company Gilda Using the best and most advanced equipment, pick up and distribute various dates including Dates and distribute these dates throughout the province Iran's cities and cities export dates It is one of the most prestigious dates production and distribution companies in the world, with over 6 countries. Iran is proud to cooperate with esteemed customers and buyers.

Export Barahi Date to all countries

Gilda Date Manufacturing Company, one of the largest exporter of dates, exports export dates to Iranian regional and European countries. For immediate and direct purchase from the factory and wholesale purchase please export date Barahi for the best price and quality contact the following phones .