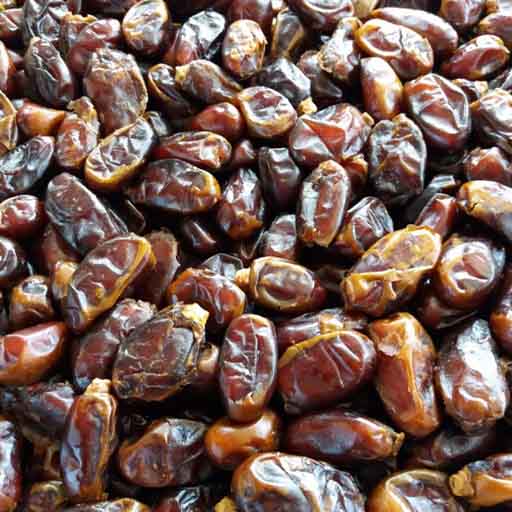 sayer dates (Estamran date) are one of the sweetest dates in the world. Its sugar content is above 5%.

The harvest date of the colonies or others is about September. This product is one of the major export dates that is exported to Europe. The palm trees under cultivation are the colonies of Khuzestan province.

About 5% of Khuzestan province covers this product and is part of semi-arid palms with humidity and humidity less than 18%. This has led to better and longer storage conditions than other dates. The harvest time of these palm trees is late September and early October.

Sayer dates can be stored for long (about 6 months) in indoor warehouses and at ambient temperature without any problems, facilitating the export sayer dates as something like 45% of Iran’s date of export belongs to Estamran dates or sayer dates.

Estamran dates dates or dates other than semi-arid or semi-humid dates are classified as less than 18% moisture. This has helped to keep these dates better and longer. It even provides easier conditions for exporting this product.

The most common types of date packs for export are cartons of 5 and 10 kg. These cartons are usually laminated. According to experts, the dates contain over 75% sugar and people with diabetes or diabetes should be careful about their consumption.

These dates can be easily stored in normal conditions in a covered warehouse for up to 15 months and do not require abnormal temperatures. About 45 percent of these dates are exported and are the most economical and economical type of Iranian date palm for global and domestic consumption.

The color of this date is dark brown to black and red, sayer dates (colonies) due to its high sugar content dissolve rapidly in the water and create a lot of sweetness. The degree of adhesion of the kernel to sayer dates is very low.

Its core is effortlessly and easily separated from the dates and has the capability to be nucleated, with most of the sayer dates customers exporting to European countries, Russia, North America, New Zealand and the Arab countries.

Due to the high sugar content of these dates, it can be easily dissolved in water and used with tea or other beverages. Of course, this type of dates is also used for the production of pastries or drinks, which can be classified among natural sugars if used for production.

The dates are dark brown and come in three large, medium and small sizes. The core’s adhesion to the main fruit is very low and can easily be used to produce by-products. Of course, some people also know this type of date as the name of the dates.

The main customers are Estamran dates, European and North American countries and especially Russia. These dates are very popular in these countries. Due to the popularity of these dates in other countries, high sugar content and low cellulose. Russia, Canada, Australia, the United Kingdom and New Zealand are the largest customers of this type in the world.

Shadegan is one of the cities where the date of colonization is highly cultivated and the quality of this type is very high. Shadegan dates have a special place among Estamran dates. According to the latest information, about thirteen thousand and six hundred hectares of land in this city are covered with palm plantations and palm trees. Of this amount, about 10,000 hectares are considered fertile.

Although droughts have caused many of these crops to decline in recent years and the quality of some dates from these crops has declined, still, these crops are still the most abundant in Khuzestan province.

It should be noted, however, that although these dates are widely popular and sold in foreign markets, they are not well known in Iran and their consumption in Iran is far from the standards of many countries in the world.

Dates are generally high-end foods and highly recommended. It has a high nutritional value and is very useful. Estamran dates dates It is also one of the high nutritional dates that due to its variety of vitamins, high sugar, minerals such as Iron, magnesium, potassium and phosphorus are one of the best varieties of dates especially for children and their snacks.

The high sugar of these dates helps athletes get the energy and calories they need for an intense workout. For this reason, most sports coaches familiar with these dates recommend their students as a daily snack.

These dates are easily packaged and easy to transport. Even simple refrigerator-free containers can be transported over long distances or can be easily stored. Due to the low sap of these dates, insects should be kept in their storage environment.

These dates except Khuzestan in Shadegan, Abadan, Mahshahr, Karun and Ahvaz are also widely cultivated and are native to the southern parts of the country. The export value of this product is very high and therefore of great economic value.

This oyster is oval-shaped and may have different flavors depending on the weather. These dates are dark brown in color and can be a little time-consuming when roasted. Its core is easily detached and, due to its low moisture content, has a lower sap content than other dates.

These dates are available in three types or sizes, large, medium and small, with the main export being meat or larger dates.

One of the major problems in selling these dates is the lack of proper packaging and preparation equipment. These dates are packed in 5 to 10kg cartons for export and 2 to 3kg cartons for domestic consumption. Generally a lightweight packaging design or export-friendly appearance for higher and higher value sales continues to be considered. One of the problems or areas of investment can be addressed.

Gilda Dates Manufacturing Company uses the most up-to-date sorting, washing, packing and shearing machines and the newest ways to preserve and preserve a variety of dates in very standard storage conditions, Exports high quality Estamran dates dates to many parts of Iran and many countries outside Iran.

However, because they are from dry or semi-arid families, packing them can not be too difficult. Today in the south of the country, many families earn these types of dates and have created many direct and indirect jobs.

Exports Estamran Dates to all countries

Gilda Date Manufacturing Company, one of the largest exporter of dates, exports Estamran dates to Iran in regional and European countries. For direct and indirect purchase from the factory and wholesale purchase for Estamran dates Contact the following phones at the best price and quality.