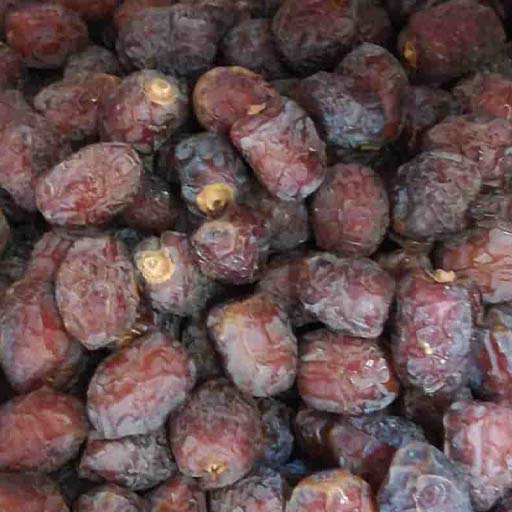 Lolo dates with a special shape and plum-like dates, attracted many foreign and domestic customers in the last few years. Plum dates have far easier storage conditions than other date varieties.

The taste of plum dates is very similar to piyaram dates, but is much more economical and affordable. Plum dates are dark brown and round, with abundant fruit flesh with a relatively small nucleus and a good variety of dates.

What is Lolo dates?

Due to being unknown in the past few years, these dates have not had much market, but with the spread of information, Plum dates back to a significant market share. After eating this dates, enthusiasts have pointed to its unique and unique taste and become habitual aloe dates consumers.

Gilda dates company, according to the needs of its domestic and foreign customers during the year and during the harvesting period, has collected the highest quality date palms in up-to-date and modern packaging to meet the needs of the domestic and export markets at other times of the year. Be dates.

Alloy dates or Lolo dates are great to taste. Lolo date are tiny, their size is like a Aloi in shape and shape like a plum. Lolo dates are found in many parts of Iran. Most in Hormozgan, Khuzestan and Bushehr. And one of the most important figures is Behbahan (Khuzestan). Lolo dates are a high quality and very sweet fruit.

Fruit color is red and its size is small. In Fasa (Fars Province) this is called a Khasoei date and is considered to be the second-rate date palm in the city. In Behbahan it is also called a special name. It also has a very high storage capacity.

Lolo dates, one of the most special varieties of dates harvested from southern Iran, has attracted many customers in recent years. Plum dates have become known as Aloi dates because of their plum-like shape. Less well known in the domestic market, only those who specialize in date production know this type of date. But because of its good taste and unique form, those who eat this fruit only once will be fans of this example.

Lolo dates are selected from the best dates, weighing from 6 to 10kg, and are packaged and tested in convenient, fully hygienic packaging.

Lolo dates, also known as plum dates, are of the same size as the Khasoei dates and have a very small nucleus. The taste of this dates is very close to the date palm and it has a delicious taste. It has low humidity and falls into the category of semi-arid palms. Plum dates are about 1.5 cm in size.

Lolo dates are available as separate grains and are very similar to Khasoei dates. But it has a darker brown color and lower juice and moisture content.